Next generation sequencing implemented our knowledge of chronic lymphocytic leukemia (CLL) mutational landscape by identifying previously unrecognized, recurrently mutated genes. Among others, mutations in the PEST domain of NOTCH1 are found in ≈10% of CLL patients at diagnosis, and are considered a negative prognostic factor, associated with a more aggressive disease poorly responsive to therapies. Nevertheless, the biological mechanisms through which NOTCH1 contributes to disease evolution and the advantages conferred by the mutations are still currently under investigation.

In this paper, Francesca Arruga and colleagues describe for the first time a molecular mechanism operated by NOTCH1 in CLL. By using the CRISPR/Cas9 technology, they generated a CLL-like cell line expressing different NOTCH1 variants, to study its function and the impact of the mutations. The authors demonstrated that NOTCH1 promote growth and migration of leukemic cells by switching off the expression of the tumor suppressor gene DUSP22, through the regulation of the methylation process. These effects are enhanced by PEST-domain mutations, which stabilize the molecule and prolong signaling.

The results were validated in xenograft models, in which NOTCH1-mutated cells displayed a unique homing behavior, localizing preferentially to the spleen, at variance with the other variants.

By analyzing a large cohort of NOTCH1-mutated CLL samples, Arruga and colleagues observed that samples harboring clonally mutated leukemic population were characterized by lower levels of DUSP22, compared to the subclonal subset, and migrated more actively to CCL19, a chemokine that drives leukemic cells to lymphoid organs. Moreover, they observed that DUSP22 levels progressively decreased as the NOTCH1 mutated clone progressively expanded during the follow up of the disease.

These findings define for the first time a NOTCH1-dependend mechanism in CLL and connect NOTCH1, DUSP22, and CCL19-driven chemotaxis within a single functional network. The relevance for the disease is that NOTCH1 mutations may contribute to an unfavorable prognosis by promoting the migration of leukemic cells to the lymphoid organs, where they can find stimulatory signals favoring a more aggressive behavior. 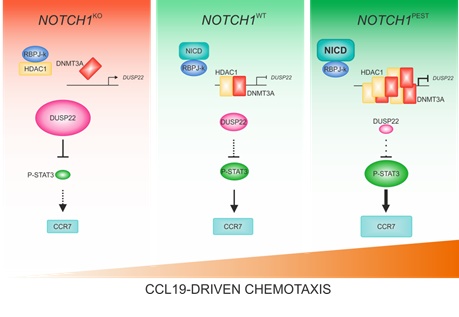 Schematic model of the proposed function of wild-type (WT) and mutated NOTCH1 in CLL. The active NOTCH1 (NICD) needs RBPJk to form a functional transcriptional complex; however, in the absence of NICD, RBPJk is repressed by histone deacetylase (HDAC1). In turn, NICD-displaced HDAC1 can bind and stabilize the DNA methyltransferase (DNMT3A), promoting its activity. The final effect is a differential methylation of the DUSP22 promoter, in turn affecting STAT3 phosphorylation, CCR7 gene transcription, and, ultimately, chemotaxis towards CCL19. 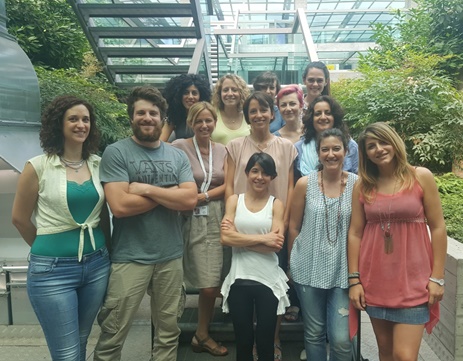